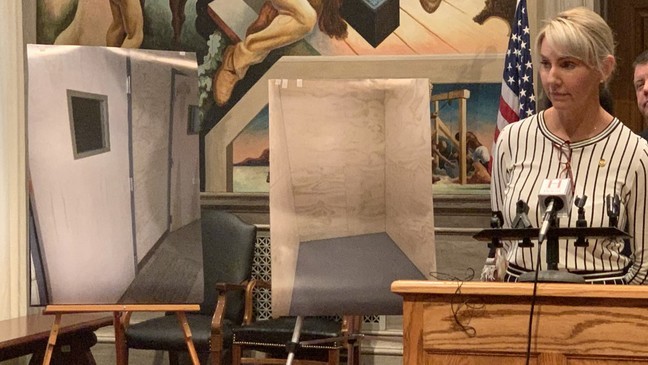 Missouri State Representative Dottie Bailey (R-Eureka) has taken up Rep. Ian Mackey’s (D-St. Louis) bill regarding restraint and seclusion policies for public school children in Missouri. This bill is apparently designed to ensure that children in Missouri public schools are not being harmed by these practices and that parents are informed whenever restraint or seclusion occurs.

Here is the link to the bill and its language at house.mo.gov. HB1568

As a former foster provider and advocate for children who exhibited a variety of unsafe and disruptive behaviors including physically acting out in the home, at school, on the bus, in public, etc. I’m very familiar with this particular issue. My experiences with these matters have led me to copious interactions with school staff and administrators, Children’s Division, Behavioral Health providers, law enforcement and so forth. There are few challenges that I can think of that can be more difficult to deal with in a safe and responsible manner than dealing with a child who is physically acting out in a way that could harm themselves and/or others. I have had the unfortunate opportunity to address these issues myself many, many times over the years.

Rep. Mackey’s bill HB1569 was sponsored last year and this year and picked up by Rep. Bailey so that it might actually make it out of Committee and be debated on the House floor. I believe that the premise for this bill is noble but I’m concerned that not enough input and insight was sought by the sponsors in order to get an accurate assessment as to the true nature of these practices. Based on some of the rhetoric that I’ve seen including unsubstantiated claims of how these practices are used (or abused) and using misleading evidence in order to demonize the practice I’m concerned that we’re not actually protecting vulnerable children but instead using their challenges as a political football in order to discredit our public school system and the staff and administrators charged under legal obligation to deal with some very challenging issues with the children that they must educate, nurture and keep safe.

Here’s a recent news story regarding HB1568, some of the disinformation that was presented by Rep. Bailey to support her bill as well as some very real concerns about the challeges in dealing with students that act out including a lack of concrete Statewide policy in this regard.
Story regarding HB1568 from KCRG- Columbia

I believe that we can best address these situations if schools, administrators and staff are given the proper resources and training to address students who act in an unsafe manner as well as given proper training as to how to address these crises. It’s no secret that public schools in Missouri are grossly underfunded during the tenure of the Republican Party’s super-majority in our State Legislature and dozens of schools have gone to 4-day weeks in order to survive. (at last count 63 School Districts) Unfortunately the schools most in need of these interventions may be those that are least able to afford it.

In my experience having children attend schools in St. Louis County and utilizing Special School District services our kids’ issues were pretty well addressed and we were well-informed about when an intervention occurred. I believe that a challenge for staff and administrators in a regular community setting is understanding and addressing “behavior” issues that often have roots in issues beyond the child’s control and they that aren’t simply “bad kids”. In addition the challenge of placing students in the least restrictive setting may also expose the general student population to distractions and disruptions (or maybe even possible physical danger) from students with challenges. This can be a challenge and even a burden for schools, staff and administrators- especially for schools with inadequate resources. Conversely the efforts to place students in the most “normal” situation possible gives challenged children the opportunity to interact with kids their age and experience the most “normal” interactions with peers possible promoting growth, progress and providing them an opportunity to have age-appropriate social interactions with peers.

I believe that if we choose to impose stronger (and not necessarily unreasonable) standards on schools, administrators and staff in regard to restraint and seclusion then we have a moral and ethical responsibility to ensure that schools also have the resources to properly- and legally- address these critical issues.

Due to our Republican super-majority’s history of chronically under-funding our public schools in Missouri, their continued efforts to further diminish revenue streams through tax cuts and Rep. Dottie Bailey’s support for diverting public school funding to Charter Schools that lack oversight and demonstrate lower academic and staffing standards, her support for eliminating our Communities’ involvement in school boards, her voiced disdain for the Department of Elementary and Secondary Education and school administrators and her copious campaign funding from the DeVos’ American Federation for Children PAC (who spent nearly as much supporting her 2018 campaign than all her Candidate Committee donors combined- $9,000) I’m suspicious of Rep. Bailey’s intentions taking up this legislation as well as concerned that if passed the directives in this bill will end up diminishing interventions for challenging students instead of protection them.

In conclusion- I support this legislation on the face of it but I fear that it won’t be tied to funding and resources to help schools to address the challenges in dealing with children who act out but will instead create a situation where schools will choose to use punitive interventions (suspension and expulsion) and law enforcement in order to address these issues instead not only for practical reasons but in order to avoid possible legal responsibility for administrators and staff who shoulder the responsibility for dealing with these issues.

I will be watching as this bill is debated and hoping for the best.